We started the journey on Gili Trawangen and got the 8am ferry to Bangsal where we were met by the trekking company. We had a free breakfast before setting off to Sembulan to start the hike which was a two-hour drive up the north end of the island. We were given one big bottle of water each before setting off. We were expecting some kind of briefing about what we were going to do each day but it didn’t happen.

We started the walk at 11.45am and went through some open meadows with a few patches of trees here and there. It was very hot! After an hour or so we stopped for lunch which was a noodle soup and cup of black tea. We then set off again through the meadows and the hill was getting noticeably steeper. Eventually there were more and more pine like trees and the slope was very steep. We stopped for a couple of breaks and were careful to ration our water. Once we reached the top of the rim, about 5.30pm we were absolutely exhausted and sweaty and suddenly got very cold so we put on jumper and trousers and windproof and walked along the ridge to find camp, where we watched the sunset which was very nice. 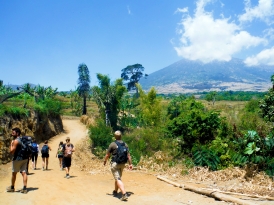 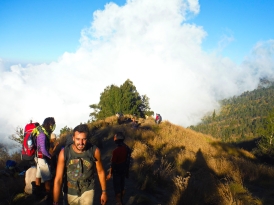 It was one of the hardest days walking I’ve ever done due the steepness and the path just going straight up the mountain instead of winding about. It was incredibly dusty and even though we used dust masks ended up with black bogies and a sore throat.

Our tents were put up by the porters and we got in our sleeping bags to warm up. We were expecting a prompt dinner as we were to get up at 2am to hike to the summit in the dark, but the dinner didn’t arrive till 9pm so we didn’t get much time to sleep. The camping mat was pretty much non existent on the hard gravel and there was nothing to use as a pillow. The sleeping bag was warm enough but it was a very uncomfortable nights sleep!

We were awoken at about 2.30am but the sounds of people getting ready. Rosy soon informed me that she hadn’t slept a wink, whereas I had managed to get a couple of hours. After a bit we decided to give the hike to the summit a go and met our group outside. Suddenly everyone started walking up and the guides (who had been pretty absent for the trek so far) just said “we’ll catch up with you later”. So we set off hurriedly into the dark trying to keep up with our group. I had managed to remember the first aid kit, 2 torches and a large bag of peanuts, but no one had given us more water. So we only had less than a litre between us. The tiny amount of information that I had managed to prise out of the guide, known as Daydi, was that it was a 3 hour walk up and a 2 hour walk down. The first 30 minutes were very hard going over loose gravel, and taking into account Rosy’s lack of sleep we decided to turn back with none of our group or guides in sight. Rosy fell flat on her arse a couple of times. We found Daydi making his way up and we told him we were going down and he asked why! So I gave him an earful about being responsible and set off down. It took about 20mins to get back to the tent and we went straight back into our sleeping bags to get some sleep. SUMMIT FAIL! We slept for a few more hours.

When we got up it was a lovely sunny day. People came down the mountain one by one, with no guide. We looked at some of the photos people had taken and, to be honest, got the impression that it wasn’t amazing, and a lot of people said it wasn’t worth it. The guides came back later and were missing 3 girls, who showed up an hour after, which just confirmed the guides didn’t give a shit about their customers and safety so we were right to turn back.

Two large troops of monkeys came by our camp during the morning, which was cool! They played with the rubbish which was strewn everywhere amongst human faeces and toilet paper. The view beyond the mess over the crater lake and beyond to the Gili island was very nice. After everyone else had a couple of hours rest we then packed up and set off down the hill into the volcano crater. 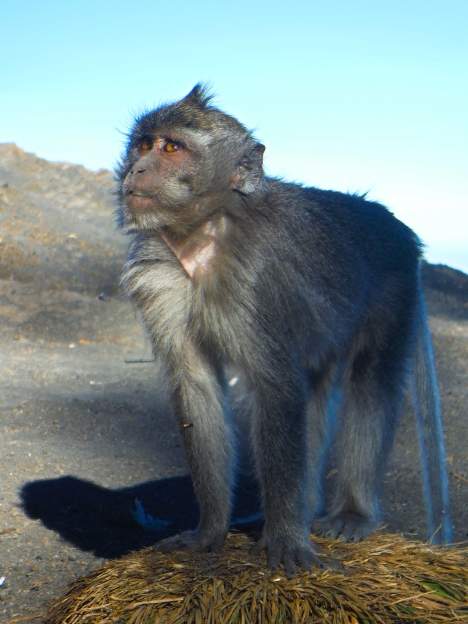 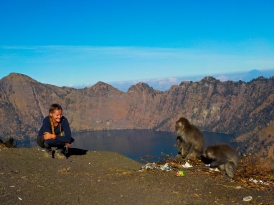 The route down was steep and a couple of bits took some negotiating and careful footwork. We were in quite a lot of cloud and once again the guides kept disappearing off behind and ahead of us. We had pretty much decided that we had to look after ourselves with regards to navigation. We walked up a valley towards the direction of the crater lake where the porters had some how got there first but had started making camp on the cobble beach. We didn’t stay there for long before we headed just downstream from the lake to the hot springs. We got the soap out and had a good bath in the cloudy volcanic water. Everyone had a good time and the hot water helped sooth the muscle ache, which must’ve been much worse for everyone who had gone to the summit!

We headed back to the beach where the porters had put up the tents. Rosy read her book while I went for a walk up the beach. From the beach there was a great view of the lake. In the center of the lake there was another volcano cone which was smouldering and had recent eruptions with fresh lava flows. You could also seen the summit of Mt Rinjani itself rising up a steep cliff into the sky behind the mini cone. I remember thinking I was glad I hadn’t already had to climb that this morning. On the beach there were other groups camped, a couple of them were local people from Lombok on their holidays, fishing in the lake using nets and longs lines of hooks kept afloat with plastic bottles. The porters cooked us a nice veg curry with rice I think, and plenty of tea. As it got dark the stars came out and they looked really cool. 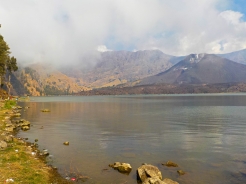 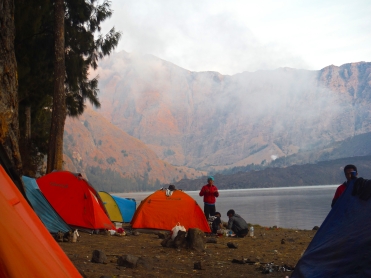 It was another early start at first light. After a pancake breakfast we set off around the edge of the lake with just a couple of stars still out. The walk up the hill out of the crater was again steep, but not as steep and the first side we went up on day one. We got into a good rhythm and stayed mostly in the shade. The morning light gave good photo conditions. We passed a lot of other groups coming down from the other direction, which was difficult in a couple of steep sections but we just had to be patient. We made it to the summit of the rim and admired the panoramic view. We could see the whole of the crater lake, mini cone and Mt Rinjani summit in the background (this is picture on all the tour adverts). You could also clearly see the Gili islands and Mt Agung on Bali in the far distance. We had a good break with a couple of snacks and a can of coke we had been saving.

The walk down from the rim was VERY long. The first section was in the open and quite loose dirt. We tried doing it carefully at first but we could see we might end up holding people up so after a while we decided just run loose legged down the hill, which proved much more efficient. We came across one of our group from Norway, who was a bit of a metal head, who had always been way out front gunning it. He had twisted his knee at some point and was walking with a stick. Again, our faithful guide just wandered off leaving him. We found him another stick and left him with another girl who was also going pretty slowly. At lunch they arrived about 30 minutes after us and I made him a knee support out of a bandage and gave him a bit of ibuprofen I had, hoping that we wouldn’t need it ourselves as we had a fair bit to go down the hill. We had entered a forest at this point and it was a long slog down the hill to the finish. I remember thinking that I was glad we had walked the direction we did as walking up that side would have been even more of a killer!

When we got to the bottom of the trail there was a shop selling drinks which we made full use of. We took a couple of photos by the trail head gate and had a bit of a rest and waited for everyone else. It was a bit spooky as along the walk there were concrete walkways with handrails which had completely fallen apart, and the park gate had a tickets office which had not been used in years. It’s as though it was all built but no one came but more recently has become a backpacker hotspot? Not sure if there is any truth in that. Anyway once everyone had arrived we had a short walk down a track to our minibus. We had originally booked to go back to Bangsal but as a free ferry was on offer to go back to Gili T we thought we would spend the remaining few days of our holiday there as we knew we liked it. The bus ride back took a couple of hours and we got the 5pm ferry to Gili T and checked back into Kia Yazoo homestay.

The 3 day trek was one of the hardest walks I have ever done. I’m not sure if this was due to our level of fitness after backpacking for 4 months (which mainly involves sitting around relaxing), but everyone who had done it said it was very very hard. I’m not sure having done it once that I would do it again so that I could do the summit as I’ve already seen the views pretty much. If I were to do it again then I would take more time to find a tour group and read more reviews of their tours. On the way down we had passed a group having their lunch which was a nice buffet with camping chairs etc. They had obviously paid more, but I think I would pay more next time to make it more enjoyable. I think we paid 60GBP each, which was a bargain, but maybe too much of a bargain? It was worth doing the walk so I would say to people “do it”. But there are other walks in the world which are far better e.g. The Haute Route in France/Switzerland, Yosemite half dome.