Hanoi to Ha Giang to Ba be lakes to Hanoi loop 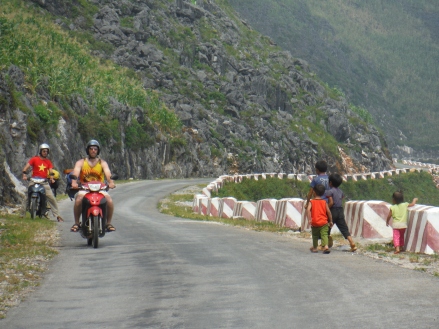 Travel permits. To travel around the Ha Giang province you will enter frontier zones near the Chinese border where you will need a special permit to travel in. You can get these yourselves or your hotel in Ha Giang should be able to help you for a small fee. You simply need to go to the immigration office in Ha Giang and ask for it, take your passport. They cost 210,000 dong each as I recall. Behave yourself in the office and people may look like they are queue jumping but just keep and calm and don’t take pictures! Beware of Sunday opening hours and a long lunch break. Map to the office in Ha Giang here. Without a permit you will find it difficult to find accommodation and the police may escort you back to Ha Giang.

We got the two 110cc semi automatic bikes from Style motorbikes in Hanoi’s old quarter. They cost 150,000D a day each and this included helmets, locks and luggage racks. Ben’s bike was a honda wave and was in reasonably good nick. Mine was meant to be a honda dream but they had already rented that so someone by mistake so they brought round a beaten up old yamaha jupiter which was almost identical to the wave.

We set off out the old quarter and over the bridge north west of hanoi towards the airport, which turned out to be very easy as the road had a lane specifically for motorbikes and bicycles and the traffic was pretty quiet (1pm). We took the road QL2 followed by 2C. North of Hanoi was pretty flat with lots of paddy fields and workers with straw hats and bicycles. Towards Tuyen Coang the scenery suddenly came out of the smog and limestone pinnacles like those seen in Halong bay rose out of the ground and the road weeved around between them. We found a hotel in Tuyen Coang for 300,000D easily and it was very new and clean. The town was geared up for tourism but there wasn’t much going on except a phone shop with a sale going on and a “Disney Park”. 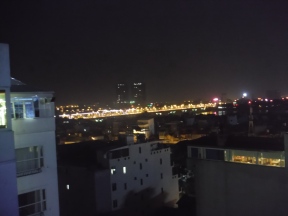 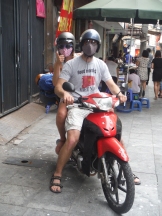 We noticed my bike was leaking few drips of oil so before we left we decided to try and buy some oil and get it topped up. We found a repair shop and instead of topping it up they completely changed out the oil costing 80,000D. We rode up highway 2 to Ha Giang. The rode was ok but quite dusty and there were a few wagons. As we got towards Ha Giang the hills got bigger with some higher mountains in the distance. Again we found a good hotel for 300,000D. Me and Ben went out to get Bia Hoi while Rosy had a knap and Annie went to find a massage. We found a Bia Hoi place which was served by 2L mini keg for 60,000D! We foolishly got into a mini drinking contest with some lads who turned out to be the on-call fire department, who when they saw smoke all ran off drunk to see what it was. 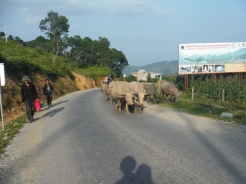 We rode out of Ha Giang on the QL4C which quickly became very scenic and the roads got steep and full of hairpins, there wasn’t much traffic though which was nice. The bikes just about coped with 2 people with luggage, but a bit more power would have been nice. Alot of time was spent crawling in 1st gear. Once we got to the top of the first big mountain pass it flattened out into a plateau with small villages and paddies. Around were stunning views of lines of mountains which looked like a crocodiles back in the haze. Along the roadside the locals were drying corn on the cob from the crops. The mountain pass peaked at what was called “Heavens gate” above the Tam Son valley. The valley bottom was flat with limestone lumps called Fairy Bosums. We rode down the valley to the bottom which got quite deep and followed the river for a while. Again the road wound up a hill side and went along a ridge over several valleys with good views. There was a very impressive pointy mountain range in the far distance over towards the north. The air was very fresh and there were pine trees around making us think we were at very high altitude. We went through a section where they were building the road and it was lucky we were on motorbike or we would not have been able to pass and we would have been there for hours waiting. The road dropped down to Yen Minh which was a quiet town. Our hotel was much like the others with a nice view over some farm land. 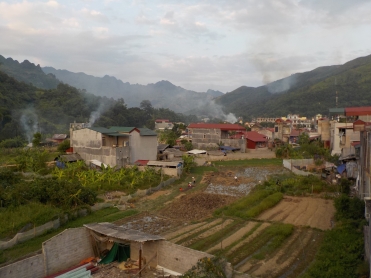 It was a short 50km drive to Don Vang, however when we were leaving Yen Minh I got a rear wheel puncture going over a water pipe going over the road. Luckily there was a Xe May motorbike repair shop nearby and he put a new inner tube in for 60,000D. The road going out towards Don Vang was much like the one the day before, narrow, tarmaced with a few potholes. It rose up into a limestone region and it wound between conicle peaks and pine areas with deep valleys with paddies below. When we got to Don Vang we found a hotel, again 300,000D a night and had some lunch. There was a large market around with lots of hill tribe people. The children kept saying hello everywhere we went on the loop. 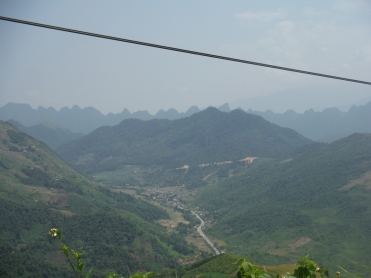 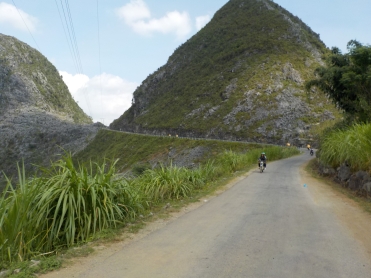 We decided to stay in Don Vang another night and spend the day doing a mini loop up to the farthest north point of Vietnam. The road was a good tarmac single road that went over a couple of valleys and passes until we got to Lung Cu where the flag tower, constructed in 2010, 25,000D each, sat on top of a hill. We walked up to the top and looked at the 360′ panoramic views over Vietnam and China. On the way back my motorbike suddenly decided to leak a load of oil while it was running on it’s side stand. So we free wheeled down a hill till we got to a garage who pointed to the gear selector so the leak couldn’t be fixed. We only wanted a top up of oil but before we knew it they had changed the oil with the most expensive moped oil they had, 220,000D. We had lunch and then rode back to Don Vang around the other side of the loop which joined the road the day before. There was a semi ruin of a french chateau built for a H’mong prince. 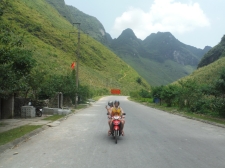 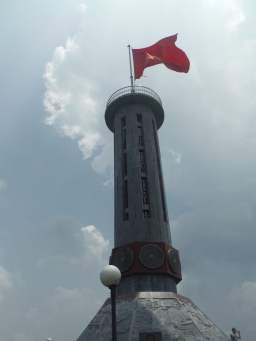 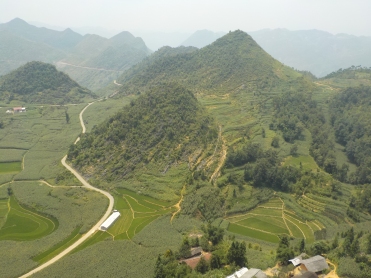 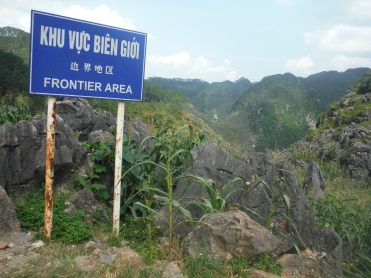 We rode out of Dong Van down a mountain side several thousand feet above a river towards Meo Vac. We stopped at a viewpoint which was stunning. A group of vietnamese tourists arrived at the same time and demanded they have photos with us all which was a good laugh but got a bit tidious when the second group arrived and wanted to do the same thing. After lunch at Meo Vac we went to Bao Lac the scenery was nice and the hills got smaller the closer we got. We cooled off in the afternoon in a river. Bao Lac was a market town with a food hall. Again we got a nice hotel for 300,000D. That evening the wind  got gusty so we stayed in the hotel as the streets were dusty and the power kept cutting out due to a storm elsewhere. 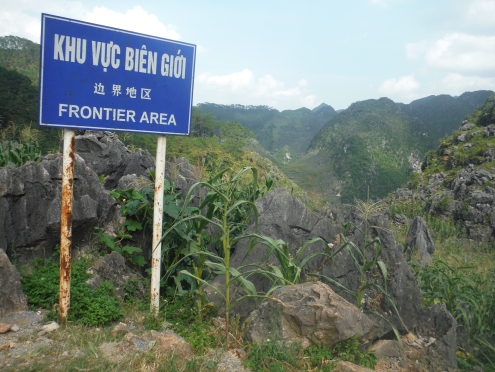 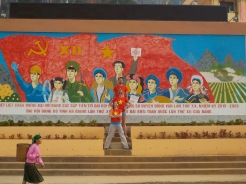 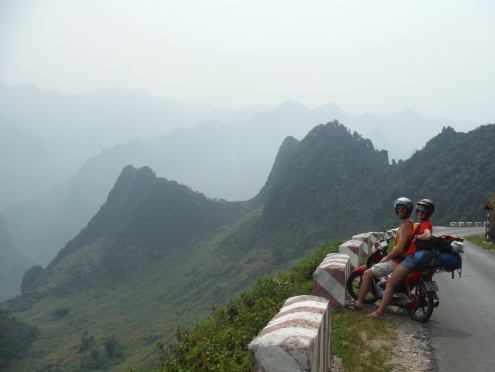 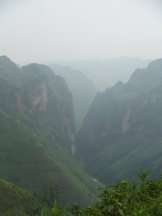 We had a long ride down to Ba be lakes national park so we set off early. The scenery was nice rolling hills till lunch when there were more dramatic hanging valleys. We took a shortcut as suggested by the maps.me app which took us over a high valley. The road though was pretty rough with loose boulders here and there but it did shave 30km off our journey.

When we got back to the main road it descended for about an hour down a long valley side with not many hairpins and good tarmac till about 2/3 the way down when it suddenly got rough again for about 15km which was very sore on the bum cheeks and took alot of concentration. We eventually got to Ba be lakes and checked into a homestay for 100,000D a night each. It was a stilt house with a view of the lake with thin walls and firm matresses on the floor. There was no aircon so it was boiling at night and non of us really slept. 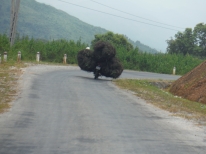 We all felt pretty tired from the day before and the bad nights sleep, so we tried to go for a swim in the lake but we couldnt find an access point. So we all felt crap because it was very hot and humid and went back to the homestay for some lunch. We all felt better after some food and got back on the bikes and went to a waterfall about 13km away which was good and you coulld get right under it. The evening meal at the guest house was good, and we were joined by a vietnamese school group who stayed up till 22:15 which was fine, but got up at 5am and started playing music and shouting and stomping around which was not. 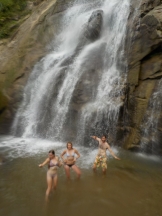 We had breakfast 8AM expecting to go on a boat tour straight away, but actually didn’t set off till noon as the noisy group had taken our boat for the morning. The boat tour was good though and went all around the lake going to a waterfall for lunch and a cave later on. We also stopped at something called the Fairy pond which turned out to just be a pond so we didn’t stay long. We had a swim by a rock in the middle of the lake and then got back to the slilt house just as it began to rain. The evening meal was good and we again had a reasonably early night. Boat trip 200,000D. 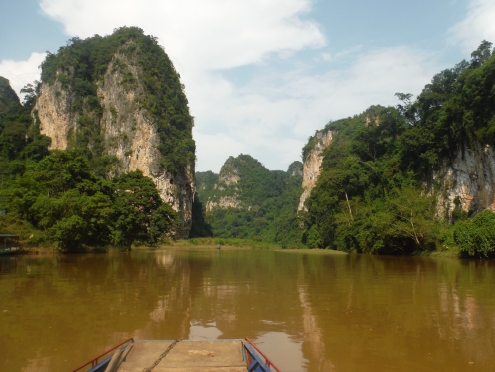 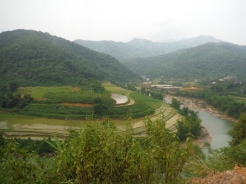 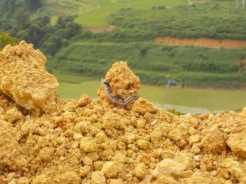 We had an early start and had a good breakfast and we were on the road by 8.40 to Hanoi. We’d had a lengthy discussion the night before about the best way back and the lady at the homestay said highway QL3 was far faster so we took that. It was a fast road, we didn’t have many stops and got back to hanoi just before 4pm. We got some money back for the oil we had to by and also a days rental as we were back early. We stayed at golden time hostel 2 again and went to Cat Ba the next day.

All in all, this motorbike trip was the best thing we did in Southeast Asia. Everyday we were rewarded with epic views of scenery which we’d never seen before. The riding is safe, go with the flow in heavy traffic and keep an eye out for potholes and you’ll be fine! I recommend it to anyone going to Vietnam who wants a real adventure! 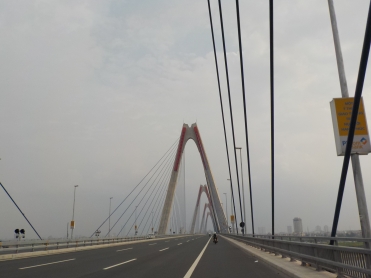 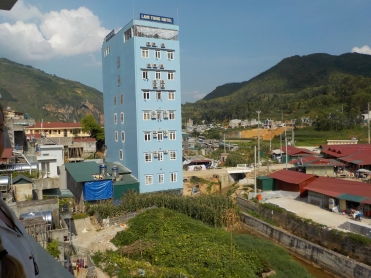